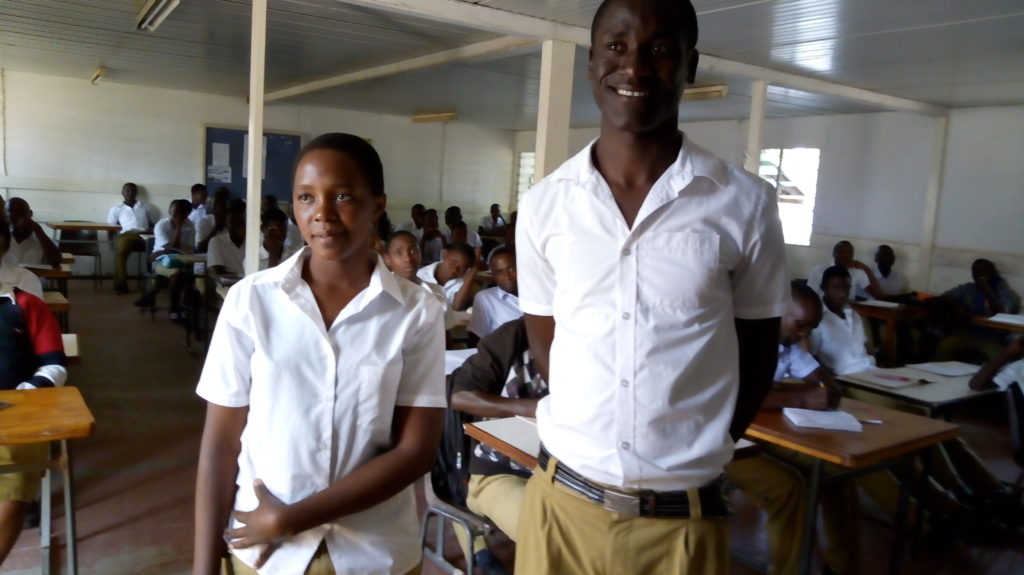 Robin and Debbie dropped in on the first year Religious Education class at Nyakato College. Monica and Masebuka were delighted to see them and show them around their college. Robin and Debbie were visiting the former Mayega Children’s Centre students and the college to get information on courses on offer next year. With three Mayega School leavers set to join the Moving -on Project in January they were  talking to staff and taking photographs to show to the prospective students. 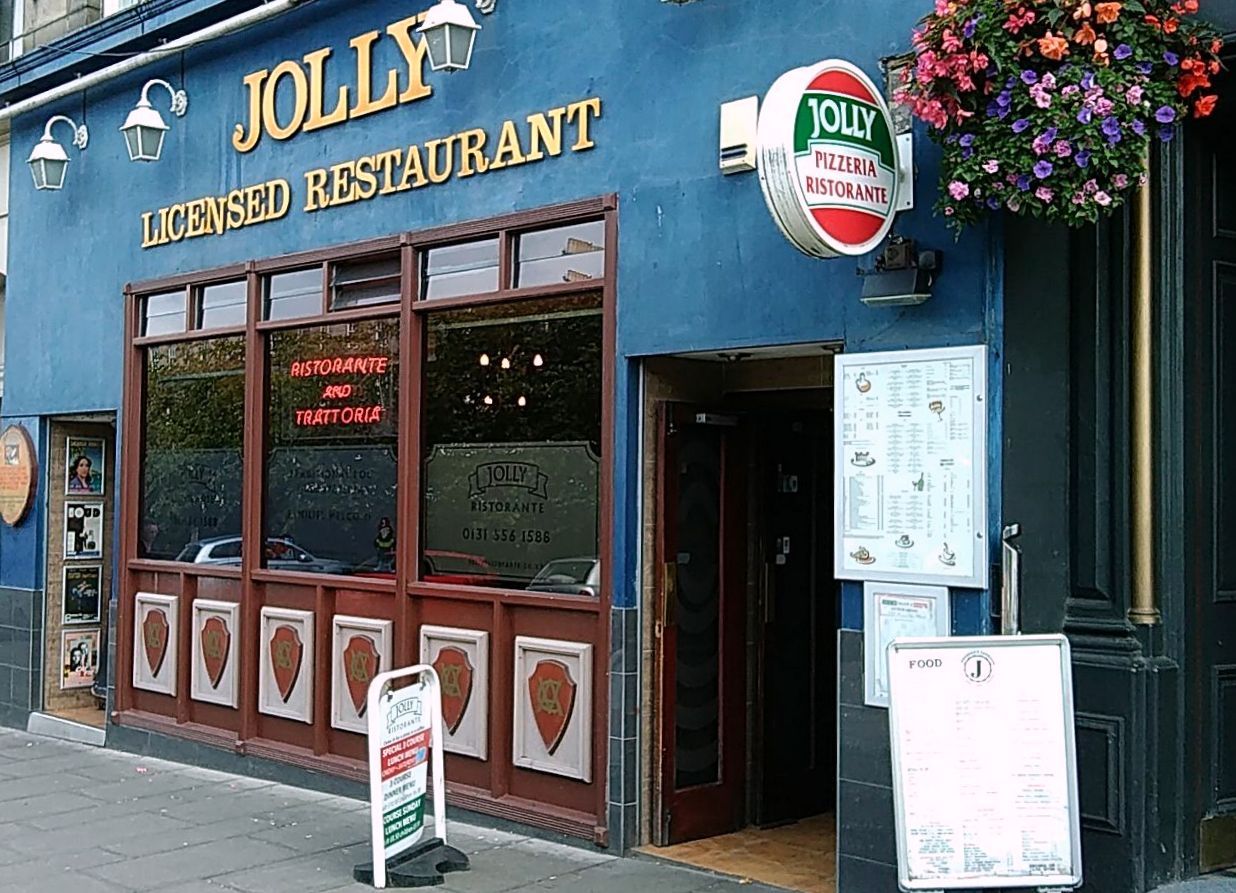 The Jolly Ristorante in Edinburgh and Busega Scotland are about to launch Busega Pizza Aid! What is it and how did it come about? Busega Scotland have nominated a pizza served at the Jolly and for each pizza sold our charity will receive a donation from the restaurant – semplice e magnifico!

John and Christine have been customers at the Jolly for as long as they can remember. Without doubt it serves the best pizzas bar none. John and Vito (the owner of the Jolly) were talking about Jolly pizzas and those served by Mwanza’s only pizza restaurant, called Kuleana’s. Menus have been swopped and Vito became interested in Busega Scotland’s work in Tanzania. From that Busega Pizza Aid was born – safi sana! 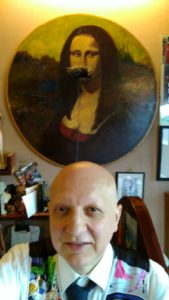 Vito said he has an interest in Africa and was attracted to Busega Scotland because he believes that ‘everyone deserves a chance and it is a good thing to help other people’. His advice about the nominated pizza was simple, ‘choose the Jolly Pizza because it is our most popular!’. 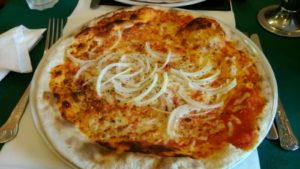 If you are in Edinburgh you will find the Jolly in the centre of town at 9, Elm Row, EH7 4AA. Also, we are trying to turn Busega Pizza Aid into a pizza aid movement. So, if you are regular at a restaurant and think the owner may be interested, then together we can do the rest. It is not complicated and all the money raised will go to Mayega Children’s Centre. Many thanks to Vito for starting us off and for his support of Busega Scotland. 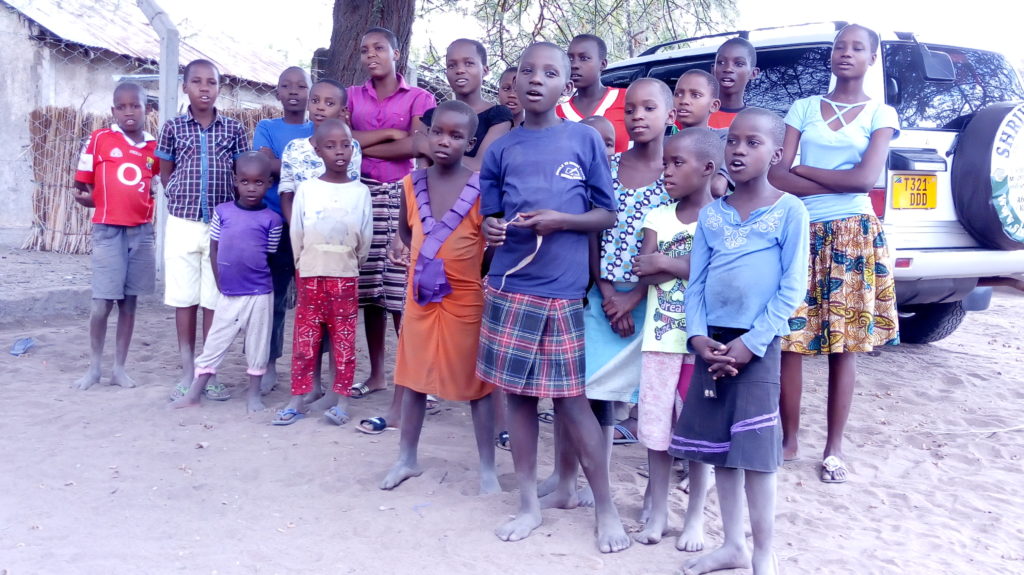 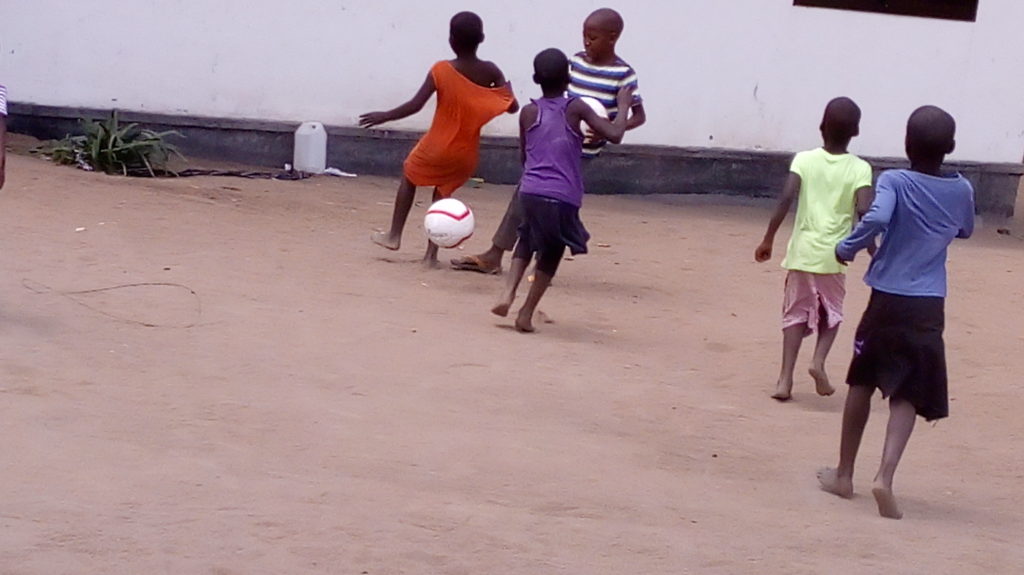 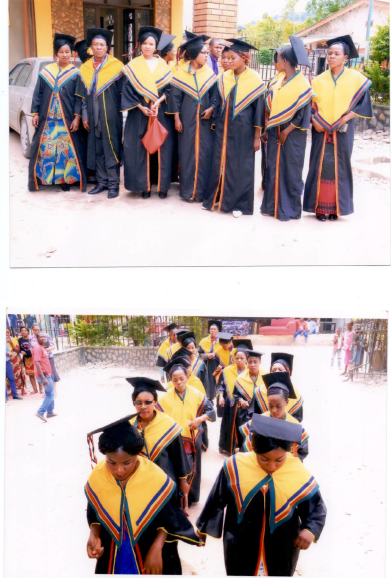 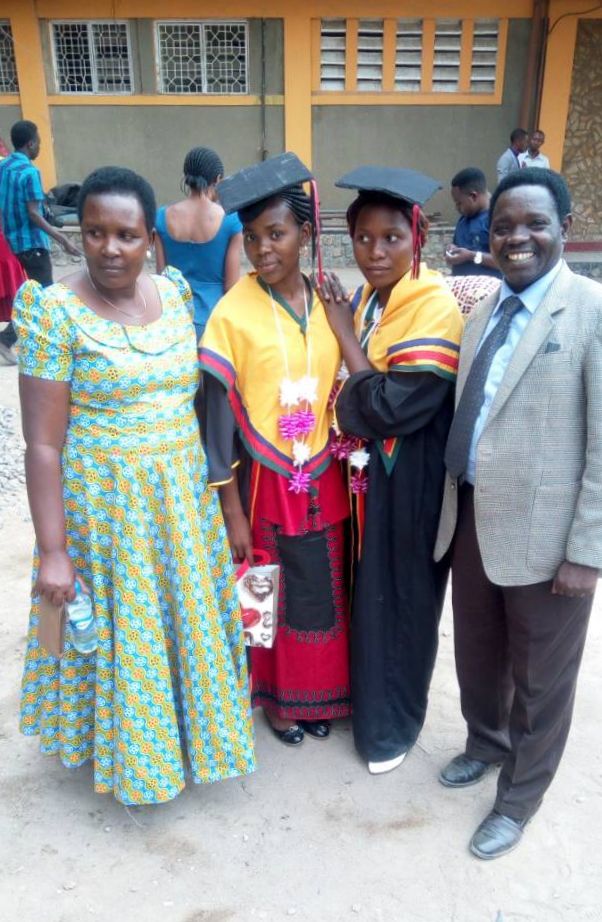 Hard work has been rewarded at two graduation ceremonies in Mwanza. First, it was time to celebrate for Kabula and Ester, who have been supported through their three year diploma courses by Busega Scotland’s Moving-on Project. Kabula has qualified in secretarial studies and Ester as a primary school teacher. This is a magnificent achievement, as the girls have adapted to life in the city, and met their academic challenges, after moving from rural life at Mayega Children’s Centre. They were accompanied at the ceremony by their ‘mother’ Leya Lusana, the centre’s matron, who travelled 85 miles from Mayega to attend.
If these achievements aren’t enough, our project leader Rev Gadlord Deuli has been awarded a degree of Master of Divinity. 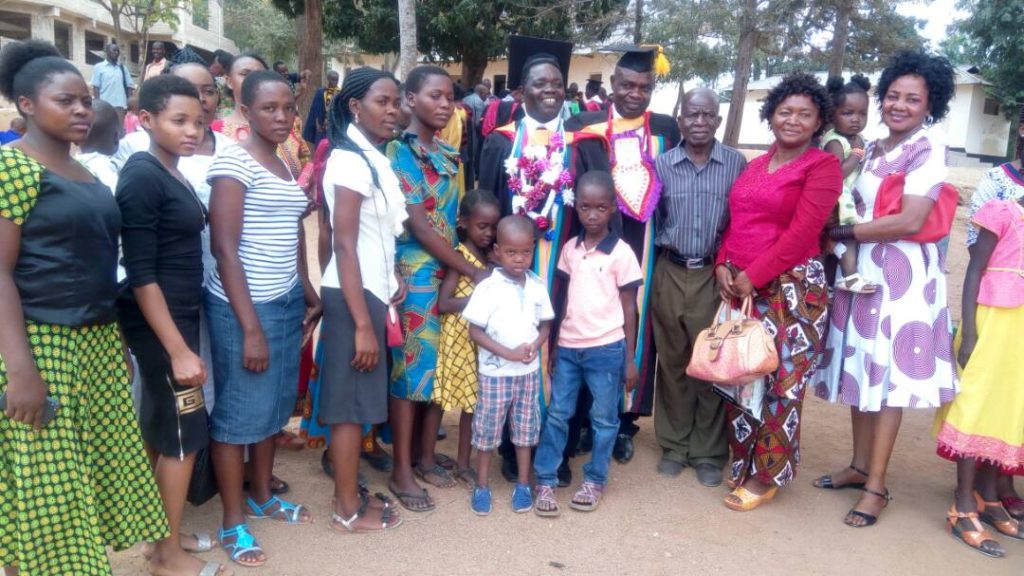 Another wonderful achievement, as he has combined his studies, and work with Busega Scotland, with being a pastor and Area Dean in the Charismatic Episcopal Church of Tanzania. Rev Deuli and his wife Jane supported Kabula and Ester practically and spiritually during their time in college.
If you would like to learn more about Kabula and Ester’s experiences, then please go to the website’s reports section and read ‘Moving-on in safety and security’.
Well done and many congratulations to our graduates!! 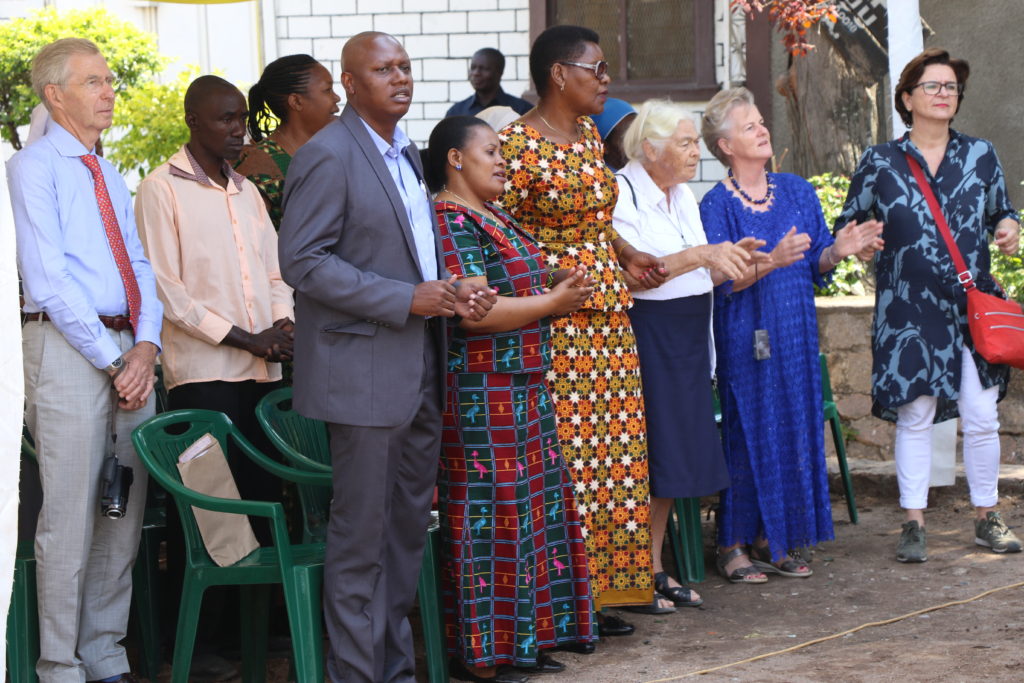 Busega Scotland has a very close relationship with a Tanzanian NGO called Shaloom Care House, based in Mwanza. While we are barely 3 years old, Shaloom has recently celebrated its 25th anniversary! The project offers services to individuals and families affected by HIV and AIDS. It is under the auspices of the Catholic church but offers support to anybody in need. There are medical and nursing services, the provision of antiretroviral drugs, a nursery and educational support for many young people. At the celebration, the project co-ordinator Msafiri Wana, welcomed Angeline Mabula,the Deputy Minister of Lands, Housing and Human Settlement as the Guest of Honour, the Archbishop of Mwanza, the Regional Commissioner (the president’s representative in Mwanza Region) and visitors from the Netherlands, who represented funding organisations. 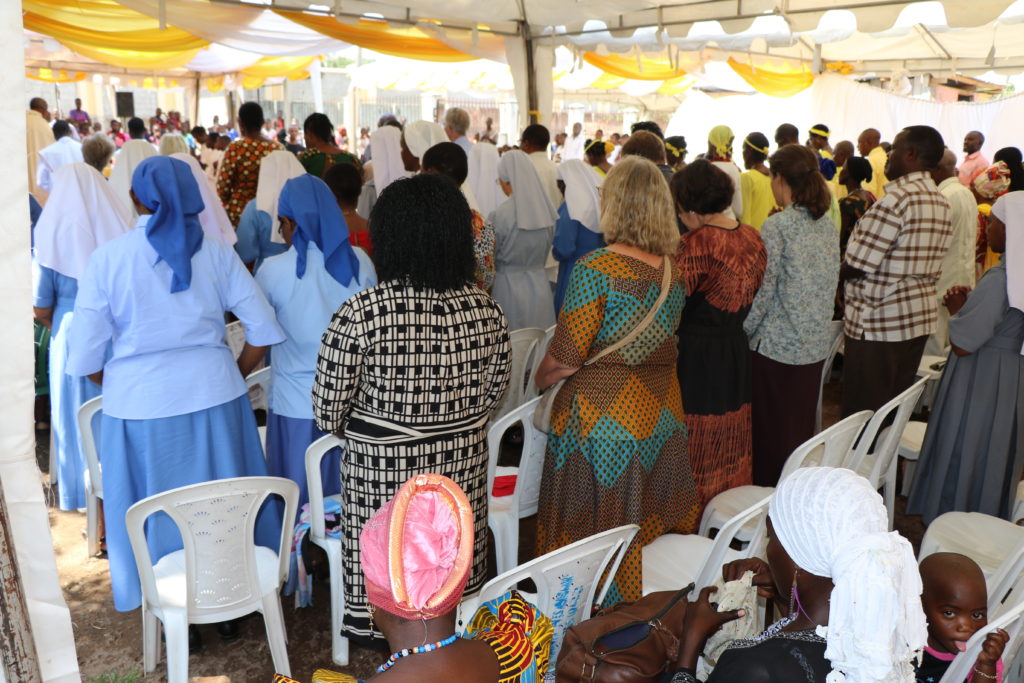 Two Nuns, who were founders of the project, also attended along with 900 guests, including 300 children. The congregation celebrated mass, and it was then entertained by the children and young people singing and by traditional dancing. The celebrations concluded with lunch. Well done to Shaloom Care House for arranging such a prestigious event and for its many achievements over such a long period of time.

Moving forward with Busega Scotland is not all about fundraising and developing our projects in Tanzania. Adding to our knowledge and to our networks is equally important. From contacts at Refuel, we attended Keswick in Buckie, are looking to set up payroll giving, have been offered support from the Edinburgh Medical Missionary Society, have a talk scheduled with the Skene Murray Mission and Christine attended an Africa Night at St Margaret’s Church in Aberlour.
Keswick in Buckie is a multi-denominational Christian convention that has been held in the Moray fishing town since 1985. Busega Scotland had a stall to spread the word of what we do and sell bags, cloth and t-shirts to raise funds. 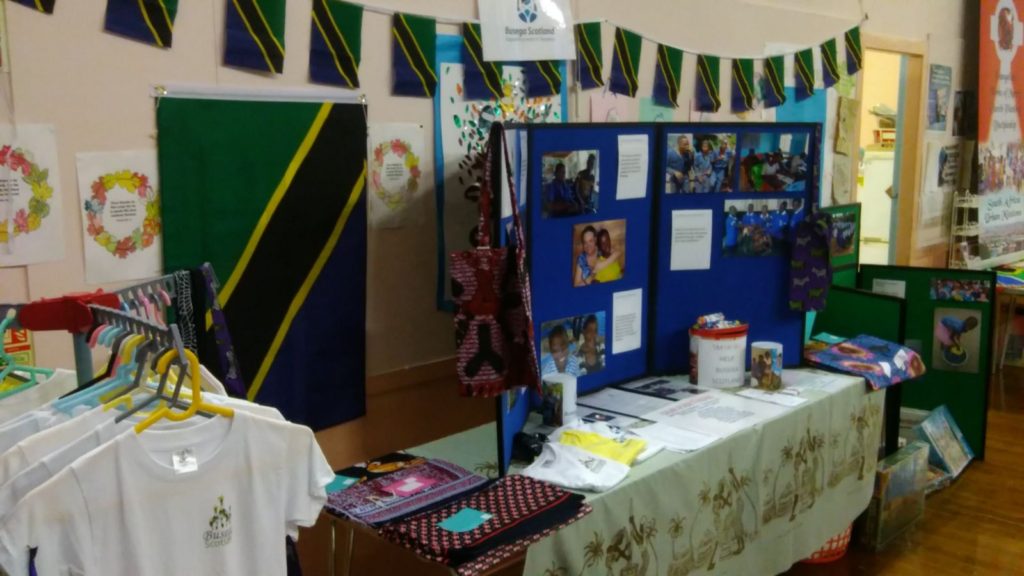 Christine also went to Aberlour for the same purposes and was treated to a display of African drumming from the Ruciteme Karyenda Culture de Buyenzi. The Burundian group are in Scotland as part of the Aberdeen International Youth Festival. Their aim is to bring their national culture to everyone and everywhere, as a sign of national unity in a country that has suffered from civil war. Drumming is a form of communication and the group certainly connected with Christine, who described the performance as ‘exhilarating’.