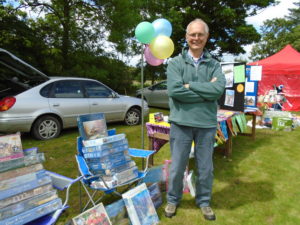 John and Christine set up a stall at the annual Maggie Fair, in their home village of Garmouth, on the last Saturday in June. The fair has taken place annually for over four hundred years and trustee, Jenny Wallen, arranged Busega Scotland’s presence to promote our work and raise funds. We collected £78 during the afternoon.
The Carneys have also made a welcome return to Lhanbryde Primary School, to update the children on life at Mayega Children’s Centre. 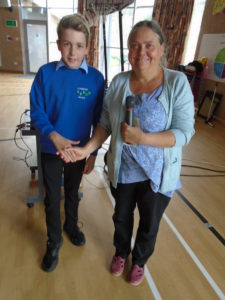 Addressing the school assembly is both a pleasure and a daunting prospect but the children are incredibly interested in the lives of their ‘Mayega friends’. The school has become a very valued supporter of education at the centre and at Mayega Primary School – providing both money and resources. One P7 pupil, Jacob Wood, undertook a sponsored cycle to raise money for sports’ equipment at the school. The magnificent £145 will go to buy netball equipment. Many thanks to Jacob and his supporters – he covered 18 miles on what is a very hilly route!
John and Christine have had the pleasure of meeting up with old friends from Mwanza and a volunteer on the Jubilee Hope, who lives just three miles from their home in Moray.
Robin and Debbie Hill will be second time visitors to Tanzania when they return with Busega Scotland later in the year. The couple said, ‘we received a warm and appreciative welcome from local people involved with Busega Scotland three years ago. We are looking forward to seeing the progress that has been made since our last visit’. John and Christine met the Hills in Edinburgh to discuss their programme and to show them the city’s many delights. 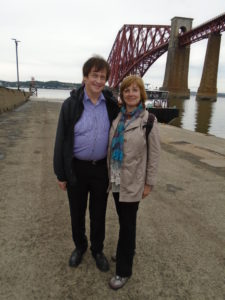 John also met Phil and Janetta Vandenberg on another visit to Edinburgh (Christine was not available due to family duties). The Vandenbergs are from Canada and were very taken with the city and Scotland as a whole. They are working their way north and east ending up in Skye – they have been well warned about the midges! When in Tanzania, Phil works as an agriculturist and Janetta in a health centre, They are volunteers with an organisation called World Renew. 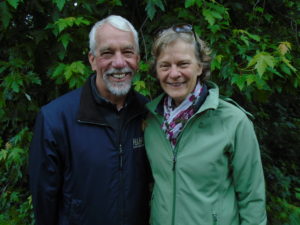 Just before John and Christine left Mwanza in May they became aware that two nurses ( a mother and daughter) from the Moray village of Fochabers, were travelling to Tanzania to serve on the medical ship, the Jubilee Hope. The vessel calls at island communities on Lake Victoria and is run by the Edinburgh-based charity, the Vine Trust. John and Christine recently met Alison Stewart, the mum, for a ‘news’ and a cuppa. The Carneys hope to visit the ship when they are back in Mwanza. 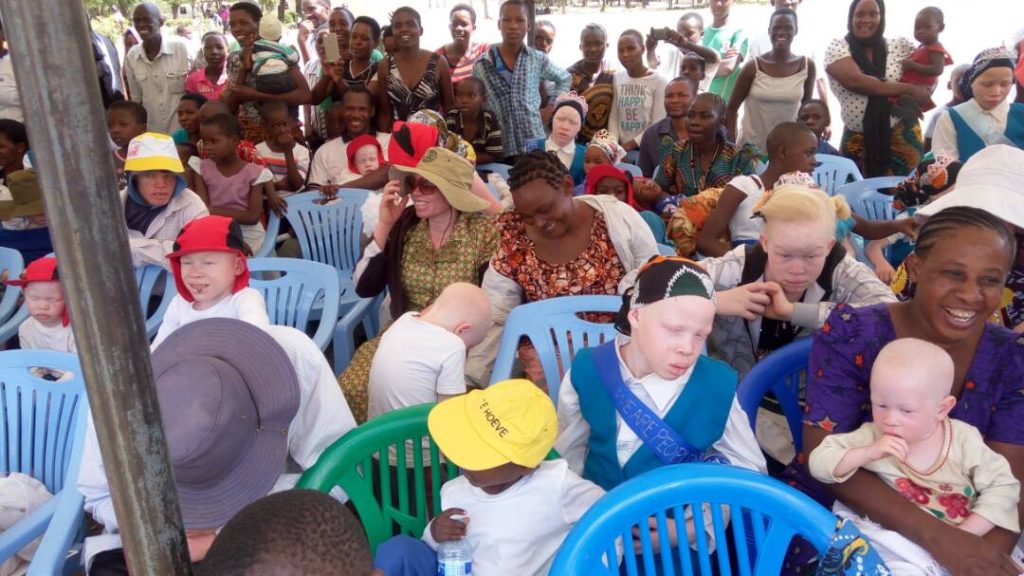 Tanzania is a country that likes to celebrate for a whole variety of different reasons. Recently, the Mayega children took part in Albinism Day, at a home for albinos some 5 miles from our centre, in a small town called Lamadi. It is extremely sad to say that albinos in the lake zone are under threat of attack as their body parts are used in witchcraft. The government is trying to stamp out the abuses and Albinism Day encourages people to celebrate diversity and help albinos feel more part of their community.
A few days later, on June 16th, Mayega Children’s Centre had the honour of hosting the Busega District’s Day of the African Child. This has been celebrated across the continent every year since 1991. It honours the children who participated in the Soweto Uprising in South Africa in 1976 and also raises awareness of the continuing need for improvement of the education provided to African children. The government chose Mayega Children’s Centre in recognition of the good care provided to the children and the efforts being made to improve education. 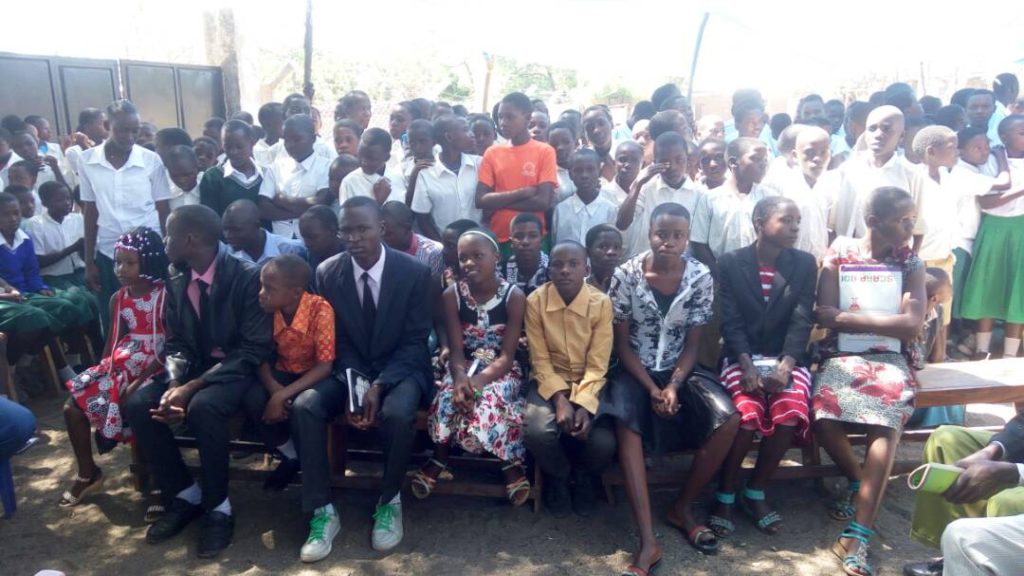 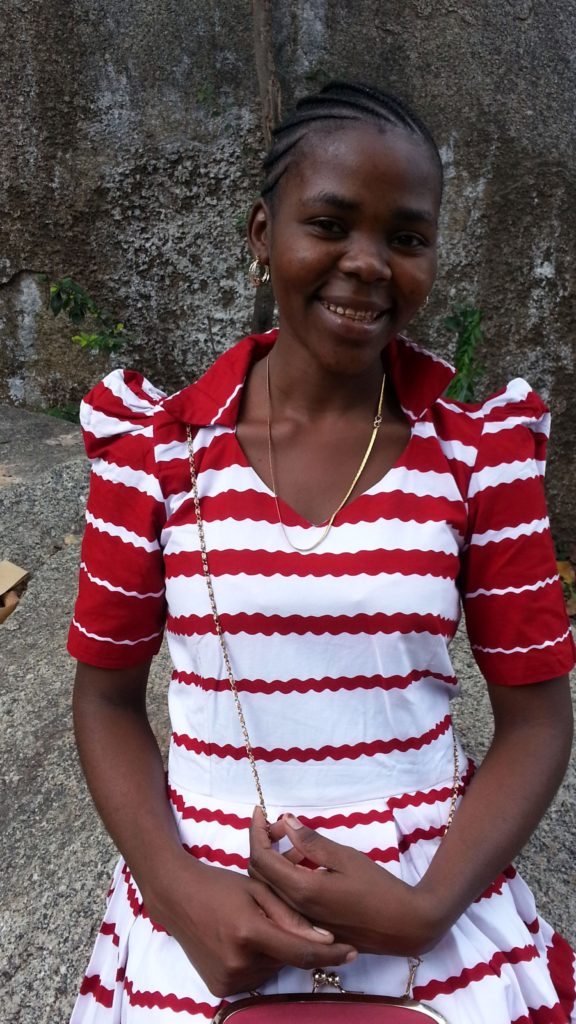 Kabula has been awarded an Upper Second Class Diploma in Secretarial from the Belvedere Business and Technology College, Mwanza.  This is the culmination of three years hard work that started with a foundation course at the Youth for Christ College Mwanza and a further two years at BBTC.

Kabula thanks the many people who have supported her along the way and invested in her future. Without that help Kabula could not have gone on to study.

Her success and the way she has conducted herself throughout her course makes her a great role model for the younger children at Mayega Children’s Centre.

We wish her further success as she circulates her CV and searches for a job. It will not be easy but she has the confidence of knowing she is well equipped to work.

Busega Scotland is very proud of her !

Sunshine followed by a monsoon did not dampen the enthusiasm of our superb Busega Scotland team in the 14th Elgin Marafun. The format is five runners sharing the full marathon distance, as a relay.

Our team is shown in the order that they ran – Calum, Alison, Stacey, Dot and Dale. 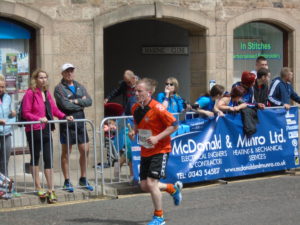 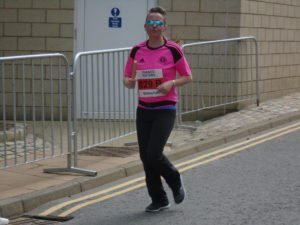 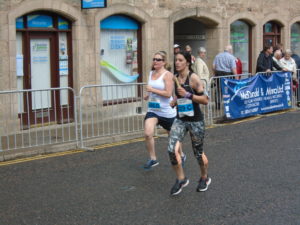 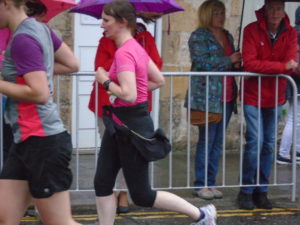 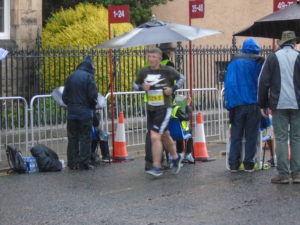 Team captain, Stacey, even ran with a broken arm – how determined was that and covered 5.2 miles in 41 minutes. The team was sponsored for Busega Scotland and raised a magnificent £500+ (£100 will be donated to the Rotary Club of Elgin, who are the organisers of Marafun). Many thanks to our athletes and sponsors. Enjoy the photos 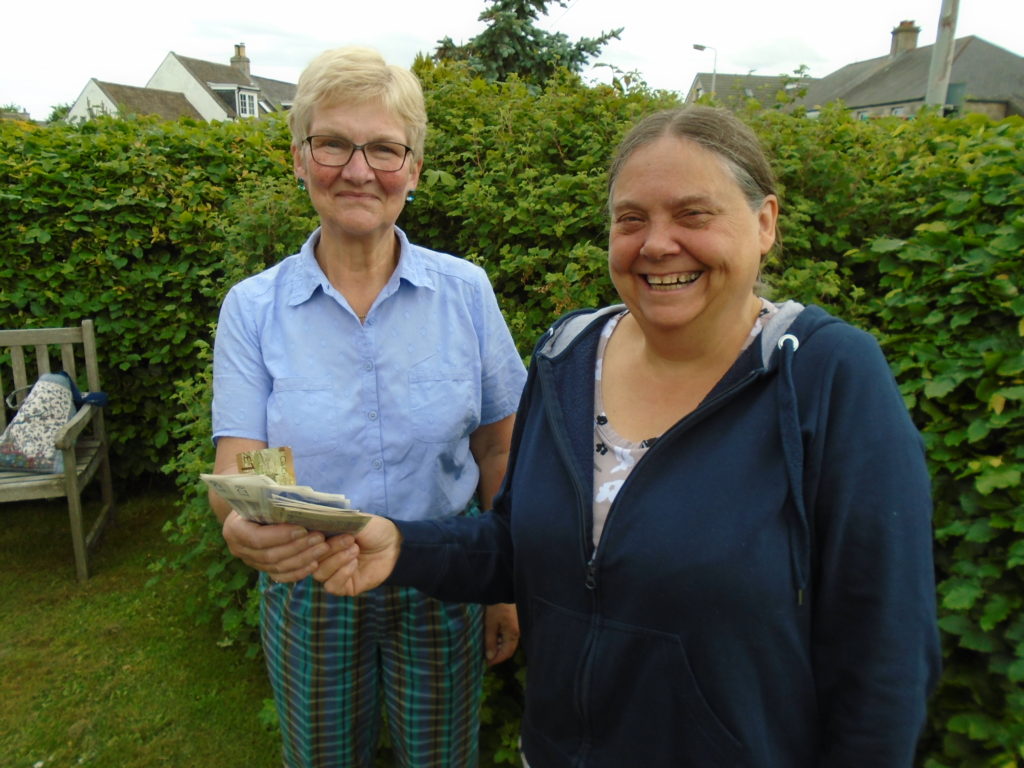 Back in March of this year John and Christine had the pleasure of attending a meeting of the Buckie Barnardos Helpers Group. After a fine lunch and a talk about the work of Busega Scotland, the group’s president, Anne McKay, distributed Smartie tubes on our behalf. This is a simple and excellent way for fundraising. When tubes are filled with 20p pieces a full tube delivers over £11.
The fantastic news is that Anne brought us £285, that we will use on educational matters at Mayega. Well done to the ladies at Buckie.
Postscript: John has known Anne for many years, when she worked as a social worker and more recently as a Moray councillor. Christine also has something in common with Anne – they are both Queen’s Guides. How they enjoyed reminiscing!
Ist June is the first day of the metrological summer and without doubt today we have been basking in a warm glow. So, why is that?
There is one question heard now and then in the Carney household, but never at the Mayega Children’s Centre, ‘can you hear a tap running?’. But all this maybe about to change. We have received an email from Dr Raphael Chegeni, the MP for Busega District:
Dear John,
Many Greetings from here!
I have some good news for you that we’ll have funds to connect water pipeline to Mayega soon.
Please be advised accordingly
Once again, my appreciation for continued support to the people in need.
Thanks
Raphael 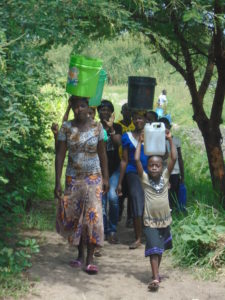 Once water reaches Mayega village we have funds from the Rotary Club of Elgin to bring the pipe into the children’s centre. What a moment that will be!
Then, a little later a message came from the Goat Race Charity in Dar es Salaam:
Dear Paul and Christine,
We are very pleased to inform you that you have been successful in your Goat Races application for 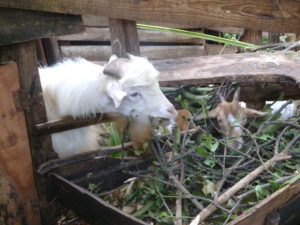 funding amounting to 4,590,000/-.
We will be in touch nearer the time, the Races will be held on Saturday, 16th September.
Kind regards
Karen
Paul is Paul Mashimba, Managing Director of our Partner NGO at the Chole Family Support Project and Karen is the Goat Race administrator. The Goat Race is a ‘high society’ charity event and we put in an application to double the size of our Chole Project to 70 families. The grant is about £1,700.
Now all our readers are feeling a warm glow!