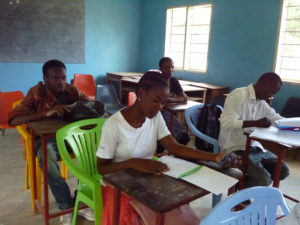 Out of the classroom and into the workplace. In February Kabula , one of Buseaga Scotland’s students, started her three month work placement as a secretary with Mwanza City Council. For the next three months she will be working in the headquarters of the Ministry of Education offices in Mwanza. Kabula is delighted as the office is well equipped with computers and all necessary materials. Sadly this is not the case in many offices. 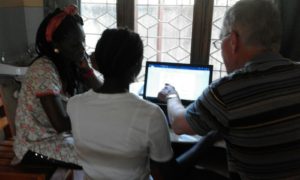 As her secretarial course is nearing its end she has been busy preparing her CV with the help of Julieth, Assistant project leader and volunteer Arnold Barrow.

Finding a job will not be easy and recruitment practices in Tanzania make it difficult for young people with no family behind them to get work. CV’s are not usually expected during recruitment however we hope having one will make her stand out from the crowd. There is a high unemployment rate among young people in Tanzania. We hope the training she has undergone and the confidence she has developed will help her find work. Her teachers have praised her for her pleasant personality and hard working nature.  We  wish her well for a successful placement and in her search for employment. 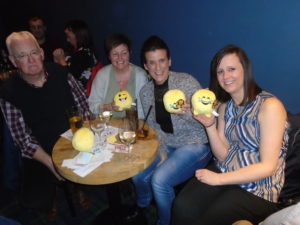 As with all teams attending a Busega Scotland quiz night, the Dream Team arrived with (maybe) high hopes of success. Unfortunately, any optimism quickly became ‘despair’, when the results were read out and they had become booby prize winners. But, as ever, it was all taken in good heart. 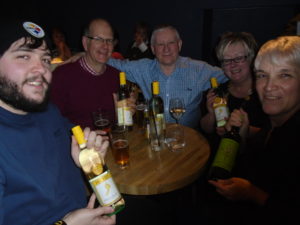 On the winner’s rostrum were Elgin Steelers, who scored an unheard of 10 out of 10 in the Africa round. There was also a ‘rags to riches’ story for Mike Fox, who had been the first person eliminated in the Heads and Tails competition at our previous quiz night. 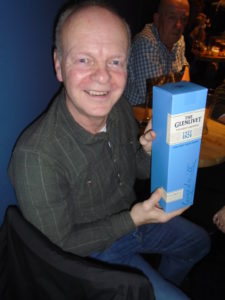 This time he won the blue ribbon prize – a testament to hours of hard study, we think!
The great news for Busega Scotland is that the event raised £600 for the Moving-on Project – absolutely superb. The message from the quizzers – it was a great night and we should do it more often. 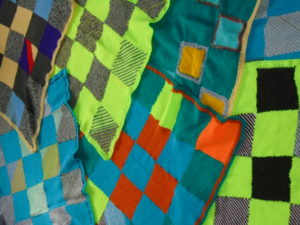 Four new children have been admitted to Mayega Children’s Centre. This has increased the number from twelve to sixteen. The children were understandably nervous and a bit bewildered at first. Arnold and Valerie Barrow have seen them since and feel they are settling in well. 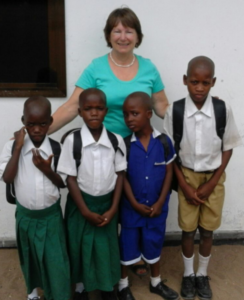 John and Christine will be visiting Mayega in March and are looking forward to also saying ‘hello’.

Thanks to the skill and industry of Lorna Logan, of Gordon Chapel in Fochabers, the children will receive a special gift of a very colourful blanket. We hope that this will help give the message ‘you are welcome and valued’, although by then we are sure these sentiments will have been provided in abundance by the ‘Mayega family’. 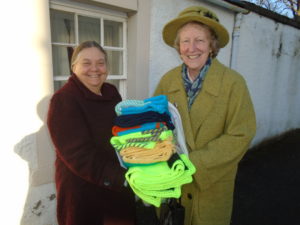 Many thanks to Lorna for her very kind gifts. 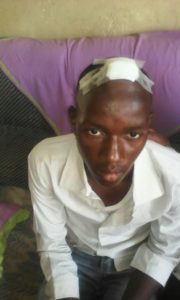 We are happy to tell you that Malesa, one of the Mayega boys, is recovering well following surgery to remove a large fatty lump from his head. He is currently in Mwanza where the surgery took place and he hopes to be able to travel back home in a few days time. Mayega is about 85 miles from Mwanza. He was supported by Matron, as well as  Valerie and Arnold at the hospital. Malesa has lived with this problem for many years and requested help to have it removed in December.

Busega Scotland and Malesa thanks everyone who has helped to make the arrangements for the surgery and pay the hospital bill. 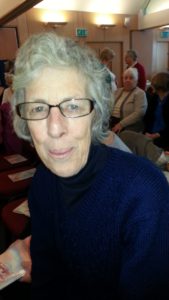 John and Christine met the Ladies Together group at Lossiemouth Baptist Church and spoke about the work of Busega Scotland. Our talk was enthusiastically received. Also, it was good to meet again an important figure in our children’s education. Claire Stewart, who introduced us to the group, was a teacher at Milne’s High School and taught Ellen, Hannah and Graeme. It was difficult not to refer to Claire as Mrs Stewart!  Old habits die hard.The group made a magnificent donation of £100, that will be used to best effect in Tanzania. Many, many thanks to the Lossie ladies.

Reports are reaching us from colleagues in Tanzania of a growing food shortage, due to limited ‘short rains’ last year and subsequent crop failures. The government is adamant that the country is not facing a famine threat and that there is enough food. The ruling party has also blamed traders for stoking up public concern and for rising prices. What we know is that the rains did effectively fail in the Mwanza and Simiyu Regions, and food prices are significantly higher. Rev Deuli, our Project Leader, organises a four month bulk food shop and we expect the load to go next week will cost about 20% more than last time (for staples like maize, rice, sugar and cooking oil). This is a significant issue for Busega Scotland, particularly as the value of the pound against the Tanzanian shilling is some 12% less than pre-EU referendum levels. Colleagues have discussed the food situation at Mayega with the Busega District Commissioner (the president’s representative) and received assurances that the government is on top of the situation. At the  children’s centre there is sufficient food however  there is hunger in the surrounding villages. We will monitor the situation carefully.

In the early days of our existence we received expert help in developing our first ‘shaking hands’ logo. This has served us well but we have been interested in alternatives and approached Moray College UHI – University of the Highlands and Islands. We prepared a ‘brief’ for Higher National Diploma (HND) students in Interactive Media, explaining our charitable purposes, services and ethos, before throwing down the gauntlet to the students to come up with new designs. We had a short leet of three; they were brilliant and we can use all of them for different purposes but there had to be a winner (voted on by trustees and our volunteers to Tanzania).

Jo Campbell’s  winning design is based on the Tanzanian coat of arms, reflects Busega Scotland’s aim to support welfare work and incorporates the two national flags. Ingenious. The students will now use the logo in other tasks, such as creating a letterhead, business cards, poster and PowerPoint templates. The logo project has been used by the college as piece of coursework and mirrored the process followed by designers in the commercial world. A superb joint venture to the benefit of the students, college and Busega Scotland. A very big thank you to the students and their lecturer, Lynne Strachen.
Jo pictured centre front. 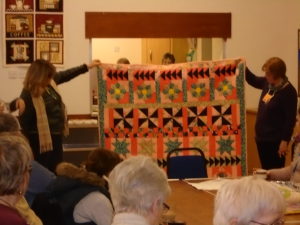 John and Christine enjoyed their visit to Speyside Quilters. The members were very kind in their appreciation of the talk they received and asked some interesting and searching questions. It was good that Christine had been able to show photographs of the Mayega Centre, to illustrate how the children have made impressive use of craft items previously donated by the quilters. The ladies then exhibited their own craftwork, in a ‘show and tell’ session. Ruth McIntosh, a longstanding supporter of Busega Scotland, had brought along a quilt she’d made for her granddaughter. A beautiful piece of work. Ruth then asked if her colleagues would join in a project to make and sell Busega shopping bags, from cloth brought back from Tanzania. She had plenty of volunteers! Wonderful! But this is not all. Members donated literally bags full of craft items, that will be taken to Mayega, to further enrich the lives of the children. The quilters also made a donation of £50 to Busega Scotland funds. Can you believe it, such a generous, enjoyable and impressive evening!

It was a night of celebration on 1st February when Busega Scotland held its first Annual General Meeting​ – we had come of age! All trustees were able to attend and our constitution lays down set functions for the meeting. The centrepiece is the Chair’s report and you will find this in the reports section of the website https://busegascotland.co.uk/reports/. The report had some significant highlights:

​There was a note of caution about finances. Despite a relatively healthy position at the moment, there is a need​ to maintain fundraising to sustain our projects, with the fall in the value of the pound and rising Tanzanian prices being added pressures. The trustees hope we can increase the number of regular donors to support day to day expenditure; especially at the Mayega Children’s Centre and for the ten students in the Moving-on Project. If any supporter is able to help by setting up a standing order, then this can be achieved through the Donate Now page on our website.

Here’s to another successful year in the life of Busega Scotland! 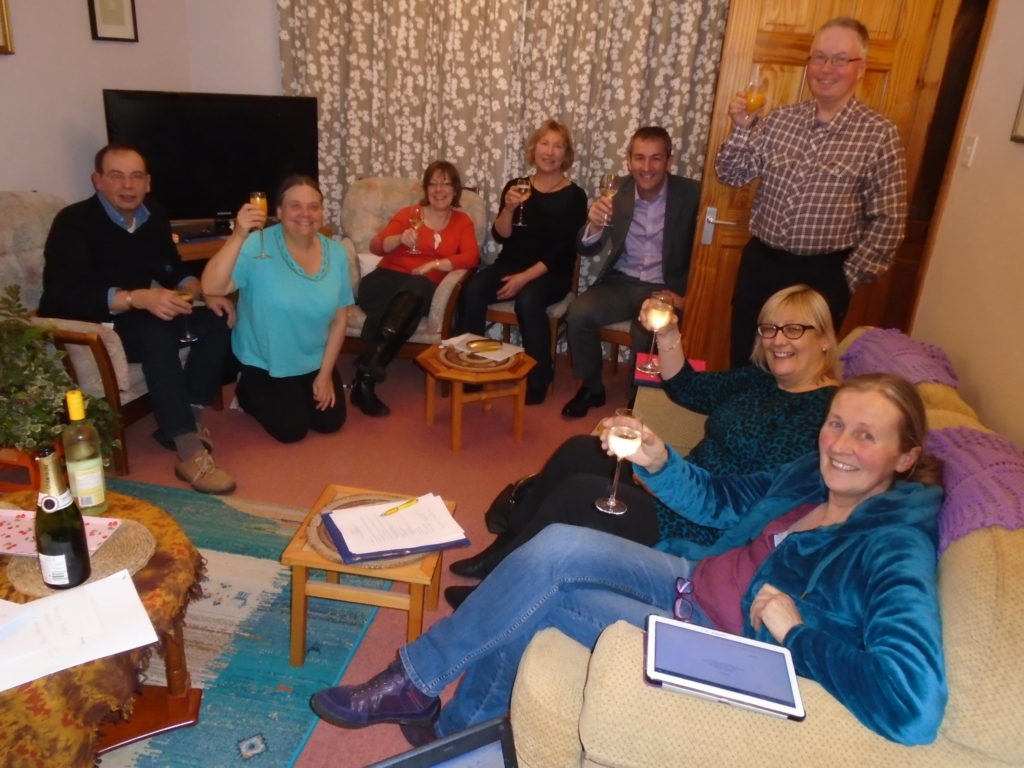