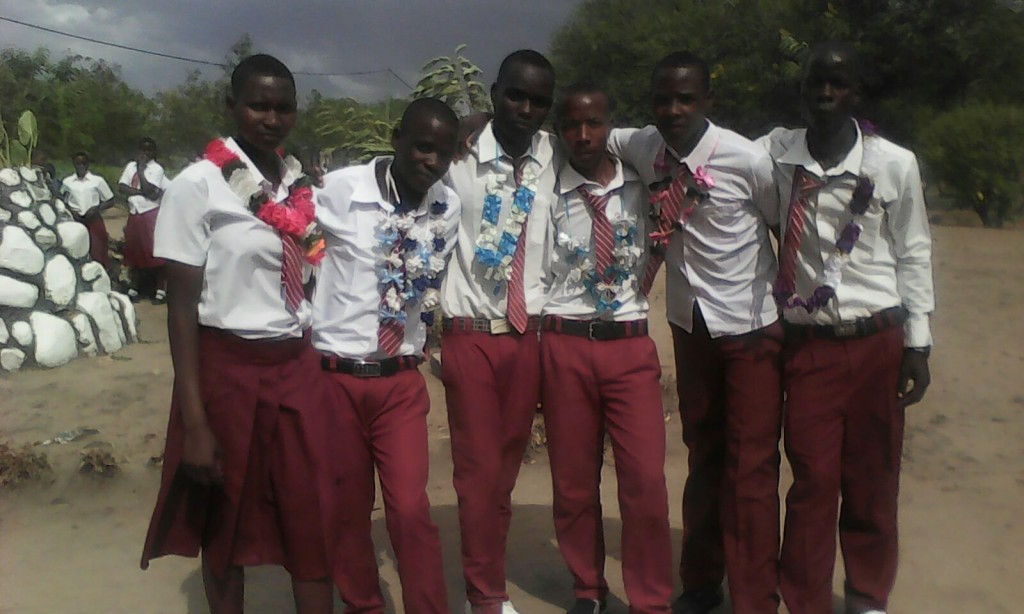 “One more step along the road I go”

Jane, Enosi, Dotto, George, Hassan and Geoffrey celebrated their last day at Kalemela Secondary School today. Supported by  Rev Gadlord Deuli, Leah (Matron) and Peter (Patron) from Mayega Children’s Centre they joined their classmates for a farewell gathering.  The young people have received support throughout their secondary education from the WAZA  Project in Canada. They have provided school uniforms and school fees .

The young people will return to sit their Form Four exams in November after the national elections on 25th October. We wish them well as they continue to study and hope they will be able to do their best during the exams. They face an uncertain future but Busega Scotland’s Moving On project will continue to offer practical support and guidance. 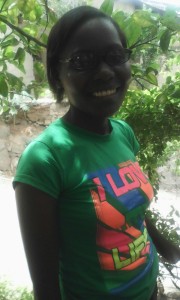 Ester says thank you to Busega Scotland for her new glasses. She is happy to have them so that she can read the blackboard at Mwanza Polytechnic where she is studying to be an early years teacher. Many people in Tanzania cannot afford to buy glasses.

The charity shop has raised £1530 to support the children in Tanzania. What a fantastic result! Our best sellers were jigsaw puzzles, books and clothes. We have booked the shop for the same time next year and want to start collecting puzzles early. This gives us time to have them checked so we can sell them as complete.  Please save your old jigsaws for us. 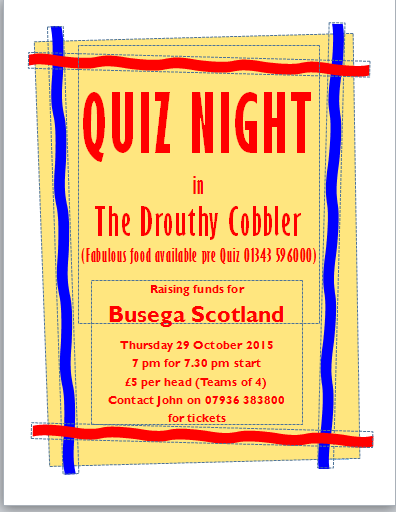 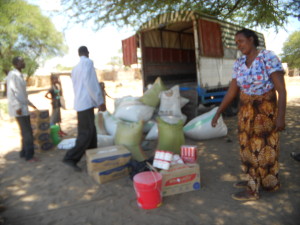 Busega Scotland’s project leader in Tanzania has had a busy week organising the bulk food shop and its transportation to the Children’s Centre at Mayega. Every 4 months staple foods and supplies are bought in Mwanza and then sent to the orphanage approximately 80 miles away. Buying rice, beans and maize in bulk is cost effective with lower prices in the city. Nervousness about the elections to be held on 25th October is the reason given for an increase in prices and we have had reports of some traders closing their businesses already. This shopping trip cost about £820 and was made possible by the generosity of  donors. Thank you . 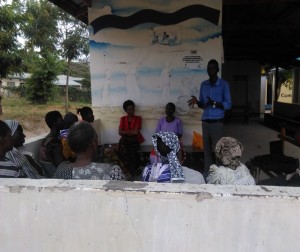 The women, who form our Family Support Project in Igombe, have teamed up with medical students from St Augustine University in Mwanza to receive much needed health education training. The students gave up their time, as volunteers, during the university vacation in September to deliver the course. They used DVDs in Swahili, produced by the UK based charity Thare Machi, as the basis for wide-ranging discussions on keeping families safe from a variety of health risks.
The leader of the training, Felix Manyogote, said ‘ The trainings went on well and we were glad as we received great cooperation from the women group at Igombe. We firstly played the DVDs for them  to watch and we later make some facilitation and more elaborations on the topic. At the end of the topic we then asked women some related questions to measure if they understood the topics. Good enough the women answered well the question. We also provided a chance for them to ask some questions related to the topics discussed and in relation to their health. We really received a lot of questions and tried to answer them professional in relation to health practices’.
The women are enthusiastic about continuing the course and have asked if Busega Scotland can source
material on urinary tract infections, cervical and breast cancer. We will do our best to meet this request. 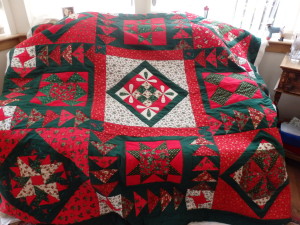 Raffle to be drawn on  27th November 2015.  All proceeds to Busega Scotland.

The idea of the Quilt was born after speaking to Christine about the plight of the children of Mayega.

We as a country have so much and they have so little in material goods. My first thought was to acquire clothing etc. to send out to Tanzania which for me would be quite an easy thing to do, but abandoned this idea after finding out that the goods sent in bulk would be costly to get there.

A new train of thought led me to ask myself what can I do to raise money? What talents do I have? What is achievable? About 2-30 am one morning it came to me, I could make a Quilt. Being a member of Speyside Quilters I have been sewing and doing Patchwork for a number of years, and like most other crafts people I had a large stash of fabric just waiting to be used.

I had everything to start fundraising

It took a few months to make, to no set pattern it just evolved and got bigger and bigger as I went along. Now finished I am going to sell tickets at 50p each, all proceeds going to Busegas.

If you don’t fancy it for yourself think how cosy the dog/cat would be if you won this for his Xmas!!

The Quilt is currently on display at the charity shop on Queen Street Lossiemouth. 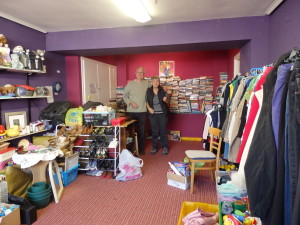 Getting ready to open the shop.

Our first go at retail has finished its first week and what a great experience it has been. We have had many helpers, many customers, great fun in keeping it all going and been amazed at the generosity of the people of Moray in donating so much stock. We have had more stock at the end of each day than at the beginning. Our biggest problem has been having enough space to display our wares and we have had to expand onto the street!

It seems to us that the shop is a great way to recycle goods to the benefit of our customers and Busega Scotland projects. Many people have asked us what we do in Tanzania and our local paper, the Northern Scot, has taken a great interest in our activities. On Wednesday they sent a reporter and photographer to the shop and on Friday published an article about us.
The shop is generating much needed funds and two supporters have covered the shop rent, meaning that all the money we raise will go to Busega Scotland projects!
Lets hope the second week is equally successful. 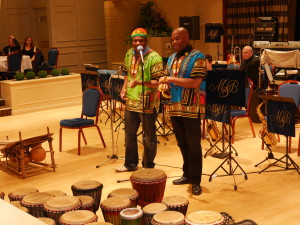 The Eight Acres Hotel rocked for Busega on 25th September with a superb concert hosted by the Moray Swing Band and friends. It really was a tremendous night with two sets by the band and a drumming session led by Brother Suleiman, who had travelled to Elgin from Glasgow for the occasion. The Swing Band maintains the tradition of big band music, with a healthy mix of experienced and younger musicians.
They play benefit concerts regularly and Busega Scotland is thankful that they included us in their schedule.
The Mayega Children’s Centre benefitted by £563 through ticket sales, raffle and generous donations by supporters. Many thanks to all who contributed to this magnificent total.
Back to Brother Suleiman. He is a Ghanaian drumming teacher who arrived in with van full of drums. After warming us up with a demonstration of his skills he ‘persuaded’ members of the audience to form an impromptu ‘African band’. Such fun and what a great noise. Well done to Brother Suleiman and his Moray drummers!
We really hope that the Swing Band will be able to do it all again for us sometime in the future.