A gift of loom band bracelets made by the 2nd Elgin Cubs are on their way to Tanzania. The children will love receiving a gift made by children in Scotland. The cubs also donated £100 towards the solar system for the new building. For more information click here

Thanks to Trayport for their continued support of the Children’s Centre. The staff team collected various  craft items , table tennis equipment , books and DVD’s before Christmas to enhance the activities offered to the children. 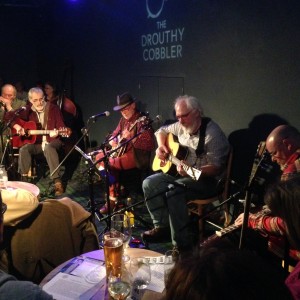 The Busega Boogie Band did Busega Scotland proud in our first fund raising event of 2015. The band, consisting of the Red Blues plus guests, played and sang ‘Americana’ – blues, bluegrass and 50’s rock and roll. An amazing total of 64 tickets were sold and the small and intimate venue at the Drouthy Cobbler made the perfect setting, as the band and audience became as one in playing, singing and tapping the night away.

There were clear calls at the end of the evening for more boogie nights and the band are committed to the work of Busega Scotland and in playing for us again. We thank them, the helpers and audience who together made the event such a great success. On the financial side a tremendous total of £456 was raised for the construction project at the Mayega Orphanage.